Science and technology have taken over the world in a hail of robots, machines, and AI programs that know the environment better than us. Each industry is now being run by assembly lines and machine oversight or assisted by technological creations in multiple ways. Amongst the industries that have wholly mechanized and removed the human factor up to the maximum is agriculture. Farmers rely primarily upon scientific techniques and technological inventions to complete the farm tasks ranging from simple to very complicated.

It is slowly becoming commonplace to observe drones flying over farmlands aiding the farmers. These flying machines assist them in various tasks and processes, which seemed nearly impossible to do until a few decades ago. However, not all drones have the capability of providing seamless service to their owners. Most of the drones are not purpose-built for farming, but that is about to change with the introduction of DJI’s MG line of drones. One of the few who do is DJIs MG-1P.

It wouldn’t be wrong to say that the MG-1P has stirred a revolution in the industry. The drone dynamics are unbeatable and equipped with the ability to simplify even the most complicated tasks. Considering the ease that it provides and the extent to which it automates the processes, its extraordinary demand does not come as a shock at all.

When it comes to safety, the MG-1P amazes the masses as it has a large number of built-in features that guarantee that your drone would not crash easily. The drone comes with 123 degrees with a wide-angle camera connected to the controller. The camera is smart enough to detect any obstacles that may come in the drone’s path and hence takes required action, either in the form of an alert to the pilot or by automatically altering its course.

Moreover, the drone actively tries preventing crashes even in the worst cases powered with a smart algorithm. If one of the motors ceases operations, the drone’s smart engine commands it to stabilize, issue a warning to the drone pilot, and charts a course to the nearest designated landing zone. In short, you can fly your MG-1P drone without even a bit of worry that it may crash or something. You are protected by state of the art technology, and crash aversion algorithms as DJI’s fantastic technology has your back.

The accuracy of the data obtained through drones is always questionable, as one is not sure of how well-calibrated the drone would be. However, this is not something to worry about in MG-1P. DJI has always paid special attention to technical details, such as the accuracy of these flying machines. That is why this particular beast also comes with D-RTK navigation, which enables centimeter-level positioning.

Moreover, the drone is protected from external electromagnetic interference thanks to the dual antennas placed to calibrate all incoming signals to filter out the useful ones. The RTK technology also enables the drone to be controlled seamlessly even in a stricter environment and around high-voltage objects such as power lines. In this place, other drones go out of control.

The drone’s radar is another plus point as it is equipped with DJI’s flagship radar system, which further contributes to its accuracy. The radar is smart enough to detect the surroundings of the drone, thus adapts accordingly. For instance, the terrain is seen, and as a result of it, the drone automatically adjusts its altitude. It is also resistant to bad weather and keeps functioning even if the weather is dusty. It comes with an IP67 module rating. So, you do not have to worry about MP-16’s accuracy.

Various Modes: In Your Palms

The MG App 2.0 is the application that comes with the drone used to operate the MG-1P. When the drone’s outstanding features, its agility, and maneuverability are reinforced with the application’s great practicality, you have a powerful machine capable of achieving complex tasks with apparent ease. The application has many modes that you can choose from, such as the banked turning, A-B route operation, and Manual Plus Operation modes, which complement the drone’s robust hardware and eases things even further.

MG-1P is undoubtedly a great machine, designed and programmed to ensure that agriculturists can rely on it. That is why, regardless of its toughness, it has all the delicate features that you would find in other drones. However, perform a thorough online search about consumer reviews and professional blogs before committing yourself to a brand of drone. You can easily find plenty of information online by some simple Google searches. What to Know About P4 Multispectral Read this review about Fly Sky fs-i6 before buying one 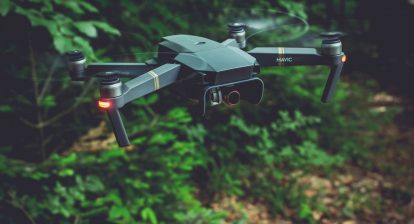 What are UFO Drones?
12 Comments